Not a lot to say about today. I finished off the spice research I started yesterday – found some interesting bits and pieces. I think it will be a fun day course.

I’ve cleaned up my office, returned all the books. Then home, bath, laundry, quick bite to eat. Everything is folded and ready to pack in the morning.
I’m going out for drinks at 8pm, and then back to the apartment, and bed.
I’ve gotten the shuttle for the airport booked for 12noon.
Can’t wait to get to going 🙂

I had a quiet start to the day, had a natter with Mum and then I went to the pharmacy to get some ear drops. I managed to get some homeopathic drops which help the pain. It seems to be easing if I use them and some painkillers. Hopefully it’ll get better soon. I’m wondering if this is caused by swimming, maybe I should get some ear plugs. I got some more ibuprofen too.

Then it was to the library, after the news yesterday that there are several people signed up for the Spices course, I decided just to potter on with some gentle research for it. I’ve been compiling a list of spices and herbs today, and I’ll finish that off tomorrow.
Of course, I received an email this evening asking that since this is the last week could they have a one-two page report on the work conducted here. And oh, could they have it before we left? So I have to get that sorted, I got most of it done this evening and I’ll finish it off tomorrow. Why can’t they tell you about these kind of things earlier?
I’ve had a quiet evening, just pottering on in the flat, sorting out some papers and stuff. I’ll get everything ready tomorrow night and pack on Wednesday morning. I’ll clean up the office and return my office keys and copy card tomorrow. I”ll book my shuttle to the airport tomorrow too.
Can’t wait to come home though.

I’d promised myself a lazy day today and I had one.
I had a lie in, did my hair – a nice brown shade, there still is some variation but it isn’t particularly noticeable. It feels much better too, not as dry. I haven’t taken pictures as you’ll see it when we chat on the webcam.
After I’d finished up with my hair I headed to Downtown and went to the Taft Museum, an art collection housed in a old family home. It was a really nice and slightly random collection, you get the impression that the family bought what they liked depending on their personal tastes rather than just buy stuff because it was classed as ‘art’. 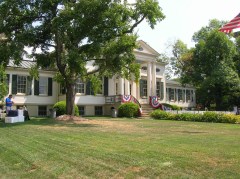 The rooms were re-decorated according to various periods from while the house was occupied. It was a lovely space to wander around. I couldn’t take pictures inside but I did get a copy of the guidebook, I’ve photographed a couple of images out of it and popped them at the end of the blog post.

After the museum I went for lunch at the same restaurant I had been to previously, the one with the brewery inside it. Then I decided to mooch around the shops downtown. These were so quiet, pretty much just me and the staff were in them and a lot of the shops in the centre were empty. I get the impression that most people don’t go to the city centre for shopping anymore.
Then it was home, and I have had just a quiet evening watching the tv, Claire is coming over later to watch Mad Men.
Tomorrow it will be back to the library, not planning a busy day, I’ll just see what else I can find.

I had hoped to get a shirt while I was at the shopping centre today but didn’t have any luck. Most had weird drawstring waists or ruffles which aren’t me. And the ones that were nice were not cut in a way that worked for me. If they fitted in the shoulders and arms, they were too big around the bust and waist, and if they fitted my waist they were too small everywhere else. I gave up after a while. Plus the colours available were never quite ‘me’.

I did, however manage to find a nice chunky belt in a nice dark brown, and it because it is a woven design there are no holes punched into it as the prong can fit anywhere – which means it is completely adjustable. 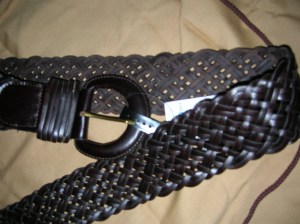 It did look very nice over the (albeit badly fitting) shirts I tried, so I know it will work with items I have or would want to have.

I also spent a little time this evening deciding which bits of clothing would not be coming back me, I’ve dumped quite a few old or shabby or baggy t-shirts and vests tonight. I have a few others which I’m on the fence about whether to keep or not, I think I need to work out if I get rid of them will I have enough stuff to last the weekend we’re away in York.

Success! I thought it had gone when I got there, but they had rearranged the handbag display. I spotted the navy blue version (of which they were quite a few left) and the lovely one I had seen was tucked right at the back of the hook.
I was so relieved when I saw it, and it was nicer than I remembered. The leather is so soft, you can’t help but touch it. It is very big, has a couple of small open pockets inside and one zipped pocket, and a simple fastener.
So here are some shots of the pretty bag. And my original sketch, I had the handles wrong (there are two not one) but I think I didn’t do a bad job remembering it.

It was only when I was showing it to John this evening that I spotted the original price tag, I had seen it for $160… originally it was meant to be $328!

All images are (C) Aphaia / onestitchmore.wordpress.com unless otherwise stated. All images used from other sources are expressly stated (with links) within the relevant blogposts.